SHOCKING VIDEO!! South Africans Ask Nigerians For Forgiveness – Do You Think They Are Truly Sorry? 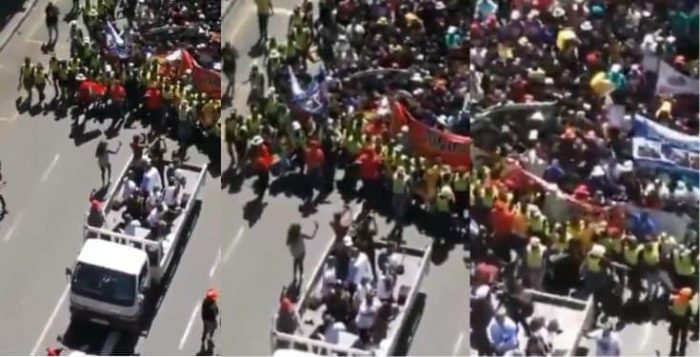 South Africans have come out en masse to ask Nigerians for forgiveness following xenophobic attacks in the county.

According to video making rounds on social media, the South Africans carried banners asking for forgiveness from Nigeria and other African countries after weeks of Xenophobic attacks.

The South Africans sang as they marched through the streets and also held up a banner which called for unity among Africans, weeks after the attacks which led to the lost of many lives, the destruction of properties and looting of shops owned by foreigners especially that of Nigerians 😢

This is coming few days after the President of South Africa, Cyril Ramaphosa dispatched a special envoy to seven African countries to deliver a solidarity message and also brief each country’s government on the South African government’s effort to address the xenophobic attacks.

Shocking to you too – right?

Do You Think South Africans Have Learnt Their Lesson?

Can They Be Truly Sorry or Just Want To Punish Nigerians The More?

Let’s hear from you all.

DO YOU AGREE? “Naira Marley Now Has A Stronger Fan Base (Marlians) Than Wizkid (Starboy FC) In Nigeria”

Based On Current Form, Is M.I Still The Best Nigerian Rapper? Who Do You Think Is Better Than Him?

Every Successful Man Fails Many Times, Don’t Be Deceived By Motivational Speakers _ Patoranking

Every Successful Man Fails Many...

Every Successful Man Fails Many Times, Don’t Be Deceived By Motivational Speakers _ Patoranking